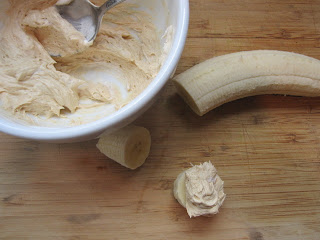 Sometimes we can't have enough bananas laying around the house and yet other times I buy them and no one eats them.  Does this happen to you? I was feeling rather confident in the banana love when I bought 3 pounds of bananas from Sam's Club.  I figured they would be gone in record time, but I was wrong.  No one ate them.  Not one single banana.
While I contemplated what I wanted to do with my bounty of bananas, I fixed myself one of my favorite childhood snacks.  Sliced bananas topped with a mixture of peanut butter and Cool Whip.  There really isn't a recipe for this.  I just slice my bananas on the thick side and then mix about 3-4 tablespoons of Cool Whip with about 1 tablespoon of peanut butter.  Then I pile the Cool Whip/peanut butter mixture on top of each banana slice. 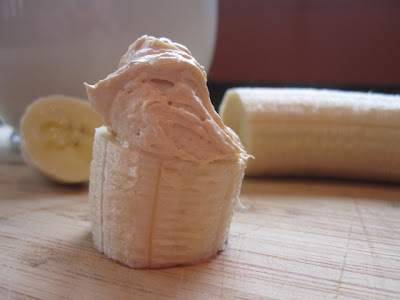 This is one of my all-time favorite snacks as I love the combo of bananas and peanut butter.  Sorry for all you Cool Whip haters.  I've tried this same treat using whipped cream and it just isn't the same. 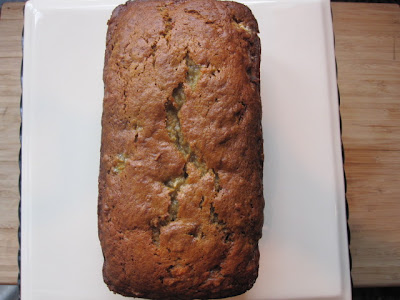 I love banana bread, so when I saw this Jacked-Up Banana Bread over on A La Graham, who got the recipe from Smitten Kitchen, I had to make it.  This banana bread is awesome for so many reasons.  First and foremost, you don't need a mixer, just a bowl and a spoon.  Easy peasy and no mess, gotta love that.  Secondly, this recipe uses 4 bananas - now that is some banana love!  Third, this banana bread is jacked-up with Bourbon, and I happen to live in Kentucky, the land of Bourbon.
Jacked-up Banana Bread
Adapted from A La Graham via Smitten Kitchen
one 4x8 inch loaf

Preheat the oven to 350°F. With a wooden spoon, mix butter into the mashed bananas in a large mixing bowl. Mix in the sugar, egg, vanilla and bourbon, then the spices. Sprinkle the baking soda and salt over the mixture and mix in. Add the flour last, mix. Pour mixture into a buttered 4×8 inch loaf pan.

Bake for 50 minutes to one hour, or until a tester comes out clean. Cool on a rack. Remove from pan and slice to serve.

I left the banana pieces on the larger side when I made this bread and I'm glad that I did.  We enjoyed the texture of the bananas and loved how the bananas caramelized on the bottom of the bread.  At first I worried that the small amount of Bourbon (1 tablespoon) would be unrecognizable, but you could definitely taste that the bread was jacked-up.  Delicious!
After my banana snack and the banana bread, I still had quite a bit of bananas left over AND I had another problem.....GIRL SCOUT COOKIES.  Since my daughter is selling Girl Scout cookies we have boxes and boxes of them everywhere.
I decided to take my favorite recipe for Banana Pudding, Paula Deen's Not Yo' Mama's Banana Pudding, and replace the regular Pepperidge Farm Chessman cookies called for in Paula's recipe with Shout Out Girl Scout Cookies.  Banana Pudding is probably my all-time favorite dessert and this amped up version with the Girl Scout cookies was fantastic.  So, if you happen to have some Shout Out Girl Scout cookies or Shortbread Girl Scout cookies then this would be a great recipe for you! 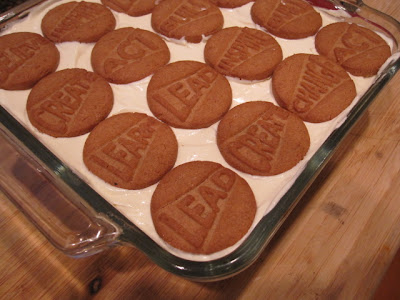 I've posted about this banana pudding recipe before, but you can find the recipe HERE on Food Network.
What do you like to do with your leftover bananas?
Posted by Kim at 9:45 AM