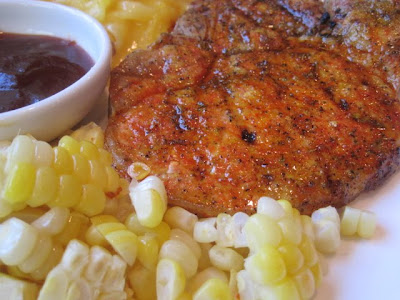 Steve Raichlen's newest book Planet Barbecue! is a huge book dedicated to barbecue recipes from all over the world. The book itself is a fun read detailing the origin of the recipe, the background and the method. I will warn you though. Once I opened this book I was compelled to look through every page, all 600 and some odd pages....in one setting. Looking through this book is like taking a relaxing trip around the world, right in the peace and quiet of your own home. 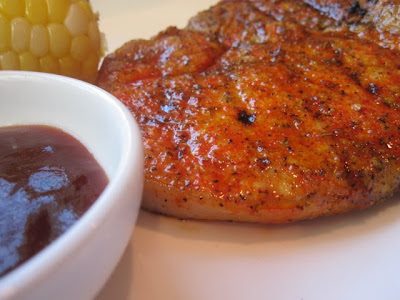 Steve says "Here's a version of the Puerto Rican Pork Shoulder made with pork chops and quick enough to be prepared on a weeknight."

Arrange the pork chops in a baking dish just large enough to hold them in a single layer. Lightly brush the chops on both side with the olive oil.

Combine the salt, oregano, granulated garlic, pepper, and sage in a bowl and stir with your fingers to mix. Sprinkle the rub over the pork chops on both sides, patting the spices onto the meat with your fingers. Let the chops cure in the refrigerator, covered for 15-30 minutes.

Make the annatto oil by heating the vegetable oil in a small saucepan. Add the annatto seeds and cook until fragrant and brown and the oil turns a bright orange, 2-4 minutes. Immediately, strain the oil into a heatproof bowl. Discard the annatto seeds.

Set the grill for direct grilling and preheat it to high. When ready to cook, brush and oil the grill grate. Arrange the chops on the hot grate at a diagonal to the bars. Grill the chops until browned on the outside and cooked through, 4-6 minutes per side. Give each chop a quarter turn on each side after 2 minutes to create a handsome crosshatch of grill marks. Start basting the chops with the annatto oil after 1 minute, basting them several times on both sides.

Transfer the chops to a platter or plate. Serve at once, which the Sparkling Barbecue Sauce, if desired, although the chops are so flavorful, you don't really need a sauce.

Sparkling Barbecue Sauce
1 cup lemon-lime soda, such as 7up
1 cup ketchup
1 cup of your favorite sweet red bbq sauce
1/2 teaspoon liquid smoke
1/2 teaspoon freshly ground black pepper
Place everything in a saucepan and whisk to mix. Bring the sauce to a simmer over medium heat and let simmer until thick and richly flavored, about 15 minutes. 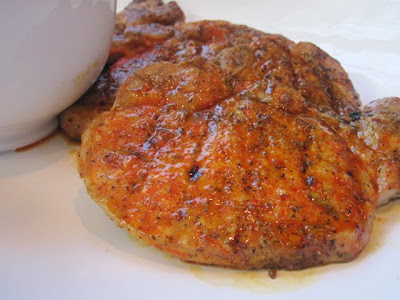 Notes/Results: My family tore through these pork chops in record time and everyone loved the vibrant orange color from the annatto oil. The seasoning on the pork chops was so fragrant and flavorful that you really don't need the sparkling barbecue sauce, but it is a nice accompaniment to the pork. I was in love with the idea of sparkling barbecue sauce and it was so much fun to make. The lemon-lime soda (Sprite or 7up) fizzes and bubbles away on the stove top making snap, crackle and pop noises while it cooks. I feel like the soda gives the barbecue sauce a lighter and fresher flavor. Overall it was an excellent dish and one that I would make again.

This is my submission to this month's Regional Recipes, currently celebrating Puerto Rico and hosted by my lovely friend Joanne of Eats Well With Others.
Posted by Kim at 5:22 PM