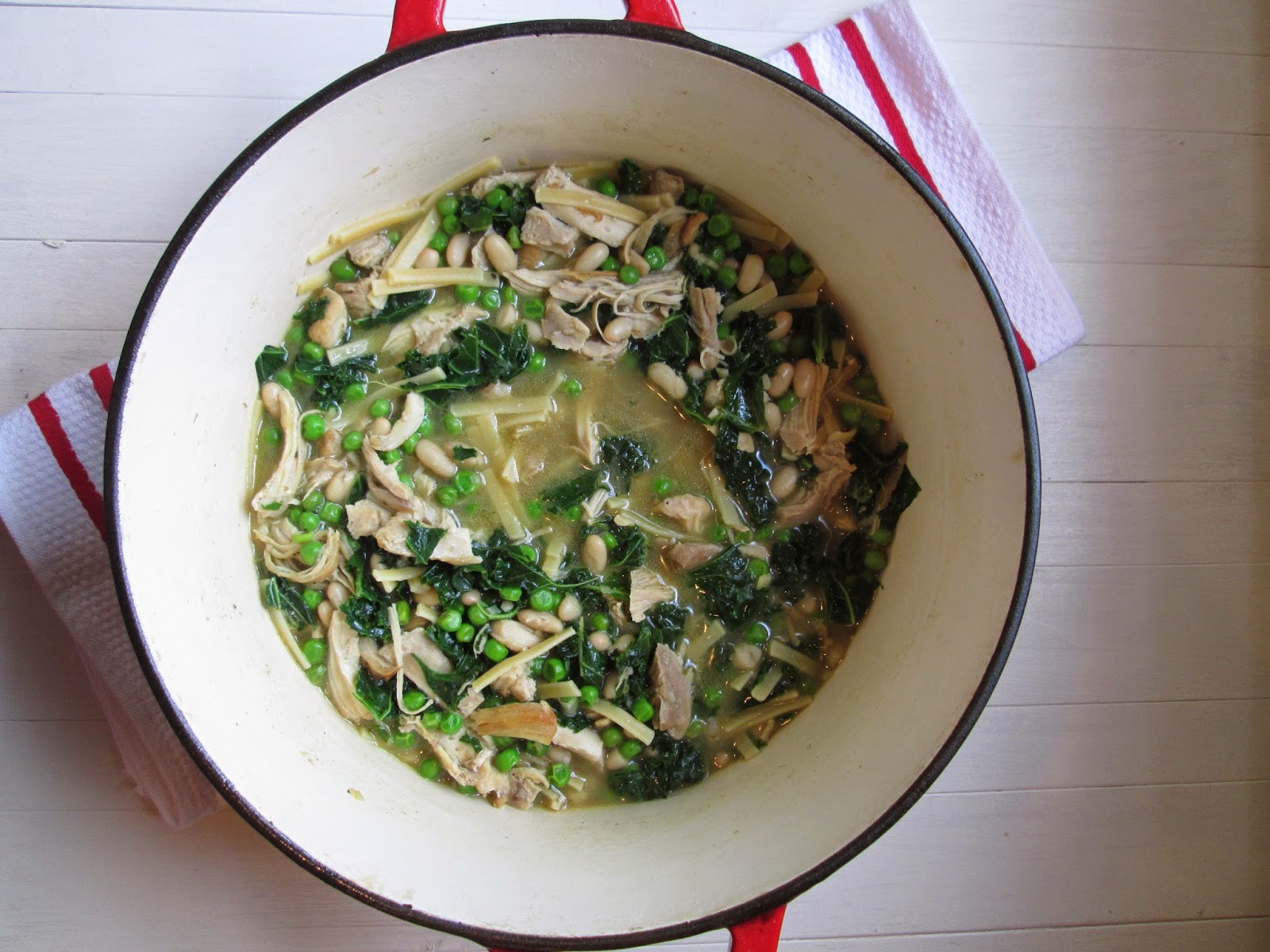 Nothing like starting off your Memorial Day Weekend with a nice case of the flu.  Not just a silly case of the stomach flu either.  The real flu.  As in Strain B.  So yeah, that cough I thought was just allergies.  Not so much.  It was the real deal flu.  My doctor was baffled.  Said he never saw a case of the flu so late in the year.

Now I work at the schools and so the general consensus was that I picked up the flu from work, but funny enough that wasn't the case.  A quick glance through my facebook feed revealed the real culprit.  The Jazzercise Center.  Can you believe I got the flu from working out?  Turns out I wasn't the only one with the flu.  There were several of us from the center that were down for the count.  The funny part?  My doctor's married to the instructor who owns the Jazzercise center.  Something tells me he saw a few more patients with the flu as the week wore on.

All week long I fantasized about eating a nice healing bowl of soup. So my first foray back into the kitchen is in fact a huge pot of soup filled with green veggies, beans, pasta, and tender chicken.  In fact, the name Green Chicken Minestrone just sounds like it should nurse you back to health, doesn't it?  I know I certainly feel better after enjoying a bowl. Good thing cause I gotta get my strength back up so I can return to Jazzercise tomorrow. 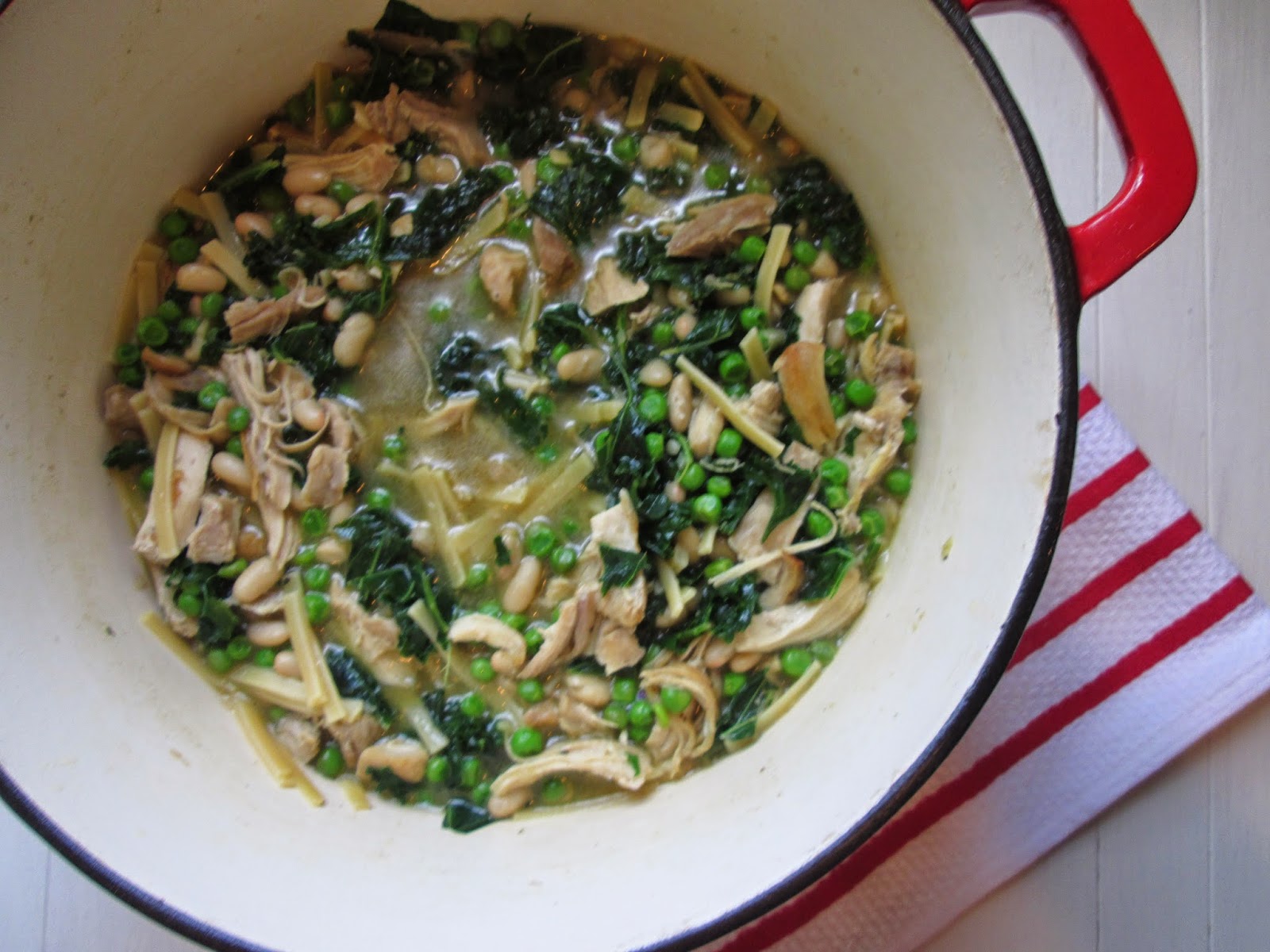 
The recipe: Season four chicken thighs then brown them on both sides in a little oil in a casserole or heavy deep-sided pan. Roughly chop and thoroughly wash two small leeks, an onion, or 2 shallots. Lift out the browned thighs and set aside, then tip the chopped leeks (onions or shallots) into the pan and let them soften over a low heat, stirring regularly so they do not brown. Return the chicken thighs to the pan, pour over a litre of chicken stock, and leave to simmer for about 20 minutes.

Remove the pods from 450g of broad beans. Break 50g of linguine into short lengths (about 2cm) and add to the pan, turning the heat up so the liquid boils, then cook for eight or nine minutes until the pasta is cooked. A few minutes before the pasta is ready, add the podded beans and 200g (shelled weight) of peas to the soup. I didn't use broad beans. I used about 2 cups of frozen peas. I also added about 2 cups of kale torn into smallish pieces and added a can of cannellini beans that had been drained. Finish with a good handful of freshly chopped parsley, check the seasoning and serve.

The Trick:  Brown the chicken thoroughly, a little more than usual, so the caramelised notes enrich the stock. The chicken pieces will also look better that way. You can use chicken or vegetable stock for this. I like to lift the chicken out of the cooking liquor before I add the pasta, then return it just as the pasta is ready. It won't come to grief if you leave it in, but by removing the chicken you will reduce the risk of overcooking.

The Twist: Instead of broad beans, use green French beans, chopped into short lengths, like the pasta. Add a hit of lemon by adding lemon thyme and a good tablespoon of chopped leaves. At the last moment, fold a handful of young spinach or garlic leaves into the stock. 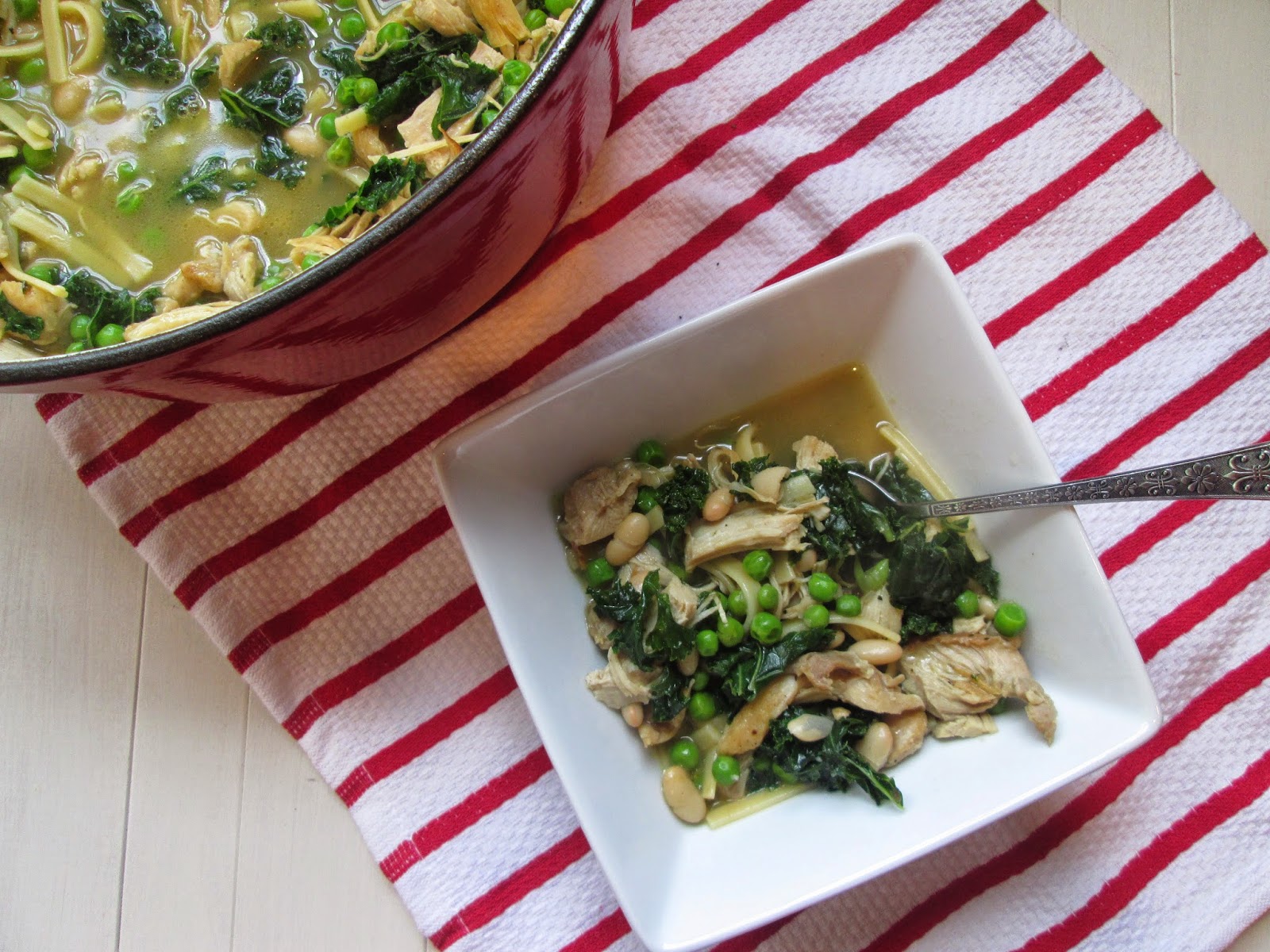