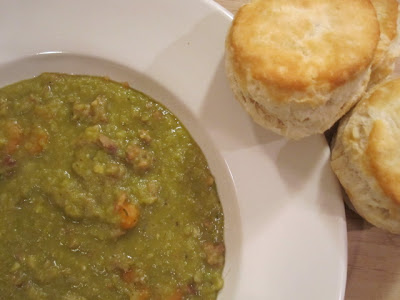 Up until now, I've only had vegetarian versions of split pea soup.  This version is MOST DEFINITELY not vegetarian.  Leave it up to Michael Symon to use not just one, but three forms of pork in his split pea soup.  In his original recipe, Symon uses bacon, ham hock and spare ribs.  I modified the recipe according to what I had on hand using bacon, ham hock, and ground sausage.  This recipe makes a huge pot of split pea soup that is so soul-satisfying and comforting.  It's thick, it's creamy, it's meaty, and it has just the right balance of spicy undertones from some ground cayenne.  Serve it up with crusty bread or some homemade biscuits and get ready for a nap.
Split Pea Soup with Bacon, Ham Hock and Sausage
Adapted from Michael Symon's Live To Cook
Serves 8-10
4 ounces slab bacon, finely diced (1/2 cup)
1/2 pound ground sausage (Symon uses 1 slab of pork ribs cut into individual pieces)
2 medium carrots, peeled and sliced into coins
1 red onion, finely diced
1 celery stalk, finely diced
1 tablespoon kosher salt, or more to taste
1 pound split peas (1-1/3 cups)
2 big garlic cloves, minced
1 bay leaf
1/2 tablespoon dried thyme leaves
1 meaty ham hock
1 teaspoon cayenne pepper
1 teaspoon freshly cracked black pepper
Crusty bread, for serving
Saute the bacon in a 6-quart Dutch oven over medium-low heat until the fat has rendered and it's cooked 5-10 minutes.  Remove the bacon to a plate with a slotted spoon, increase the heat under the pot to medium, and add the 1/2 pound ground sausage.  Brown and set aside with bacon.
Add the carrot, onion, celery, and salt and sweat the vegetables for about 3 minutes.  (You may find you need to add a little oil at this point).  Add the split peas, garlic, bay leaf, thyme, ham hock, cayenne pepper, black pepper, the reserved sausage and bacon, and 2-1/2 quarts of water.  Simmer, skimming the foam that will rise to the surface as the water comes up to heat, until the peas are tender, 2-3 hours.
Discard the bay leaf.  Remove the hock from the soup.  When it's cool enough to handle, pick the meat off it and add it back to the soup (discard the bone).
To serve, divide the ribs amoung bowls and ladle the soup over them.  Eat with abundant crusty bread.
This is my submission to Symon Sundays being hosted by Ashlee over at Veggie By Season.
Posted by Kim at 9:34 PM