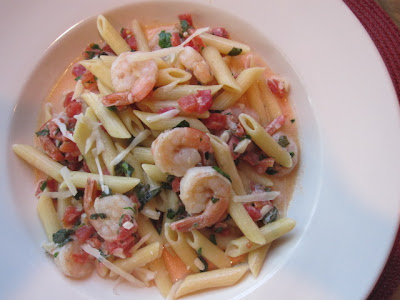 Today in the Stirring the Pot kitchen we have yet another shrimp dish.  In the past few weeks I've made garlicky shrimp, shrimp fried rice, and now Penne with Shrimp and Herbed Cream Sauce.  I've enjoyed all the shrimp dishes that I've made thus far, but this one is probably the most impressive and certainly has a restaurant-quality feel to it.  I can see making this meal for a dinner party, as a romantic meal for two, or even just for me and my girlfriends. 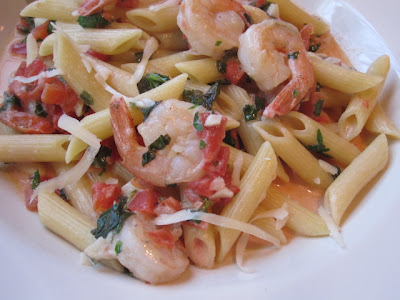 Penne with Shrimp and Herbed Cream Sauce
Adapted from Giada's Kitchen
Serves 4-6
1 pound penne pasta
1/4 cup olive oil (I used 1/8 cup)
1 pound medium shrimp, peeled and deveined
4 garlic cloves, minced
1/2 teaspoon kosher salt, plus more to taste
1 (15-ounce) can whole tomatoes, drained and roughly chopped
1/2 cup chopped fresh basil
1/2 cup chopped fresh flat-leaf parsley
1/4 teaspoon crushed red pepper flakes
1 cup dry white wine
1/2 cup bottled clam juice
3/4 cup heavy cream
1/2 cup grated Parmesan cheese
Bring a large pot of salted water to a boil over high heat.  Add the pasta and cook until tender but still firm to the bite, stirring occasionally, 8-10 minutes.  Drain the pasta and set aside.
In a large skillet, heat the oil over medium-high heat.  Add the shrimp, garlic, 1/2 teaspoon of salt, and 1/2 teaspoon of pepper.  Cook, stirring frequently, until the shrimp turn pink and are cooked through, about 3 minutes.  Using a slotted spoon, remove the shrimp from the pan and set aside.
Add the tomatoes, 1/4 cup of the basil, 1/4 cup of the parsley, and the red pepper flakes to the skillet and cook for 2 minutes, stirring constantly.  Add the wine and simmer for another 2 minutes.  Add the clam juice and cream.  Bring the mixture to a boil.  Reduce the heat to medium-low and simmer for 7 to 8 minutes until the sauce thickens.
Add 1/4 cup of the Parmesan cheese, the cooked shrimp, the drained pasta, and the remaining basil and parsley.  Toss together until all the ingredients are coated with the sauce.  Season to taste with salt and pepper.
Transfer the pasta to a large serving bowl.  Sprinkle with the remaining cheese and serve immediately. 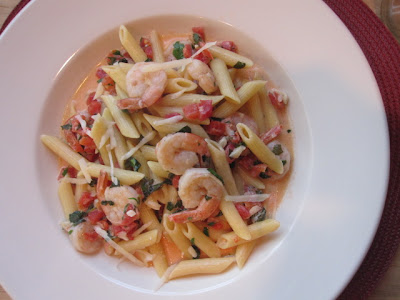 Notes/Results:  Delicious!  I think the key to this recipe is adding a little extra garlic and possibly a little extra red pepper flakes (especially if you like it hot).  I think this is a very quick and impressive meal. 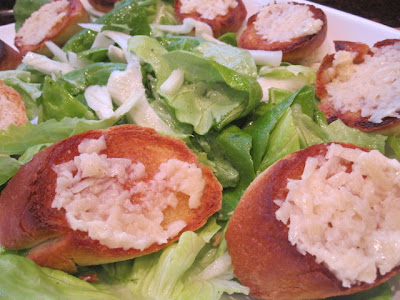