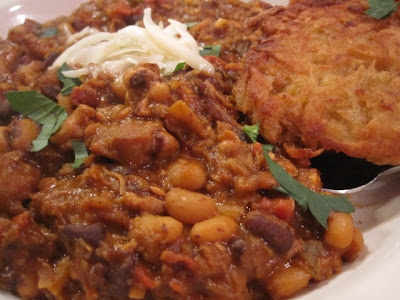 I've made beef chili, turkey chili, chicken chili, and vegetarian chili.  I've never made chili with pork, until now.  Clearly I've been missing out because Michael Symon's pork chili is delicious.  This is definitely a man's chili, hearty and robust, full of flavor, and great served with Symon's potato pancakes for dunking.

Serves 12-14
4 teaspoons coriander seeds, toasted and ground
1 tablespoon sweet smoked paprika
1 teaspoon ground cumin
5 pounds pork cheeks or pork shoulder, cleaned, trimmed, and cubed
Kosher salt and freshly ground black pepper
4 tablespoons extra virgin-olive oil
1 pound slab bacon, cut into 1/2-inch dice
1 onion, finely chopped
3 garlic cloves, minced (I used 6)
2 jalapeno chiles seeded and very finely chopped
2 red bell peppers, cored, seeded, and finely diced
1 (12 ounce) bottle amber ale or porter
2 cups Chicken Stock
1 (28-ounce) can San Marzano tomatoes, with their juice
2 canned chipotles in adobo, seeded and minced
1 pound dried black-eyed peas (1and 2/3 cups), picked over and rinsed
1 small cinnamon stick
Shredded smoked cheddar cheese, for garnish
Fresh cilantro leaves, for garnish
Sliced scallions, white and green parts, for garnish
Creme fraiche, for garnish
Note: I added about 1 cup of black beans because I had them on hand
In a large bowl, combine the coriander, paprika, and cumin and toss with the pork cheeks(or shoulder).  Season with salt and pepper.
In a large enameled cast-iron Dutch oven, heat 2 tablespoons of the oil over medium-high heat.  Add half of the pork and cook, turning as needed, until browned on all sides, about 8 minutes.  Transfer the pork to a plate.  Add the remaining 2 tablespoons of oil and brown the remaining pork.  Transfer to the plate.  Add the bacon to the pot and cook over medium heat, stirring occasionally, until browned and slightly crisp, about 7 minutes.  Add the onion, garlic, jalapenos, and bell peppers and cook, stirring occasionally, until the vegetables are softened, about 5 minutes.
Return the pork cheeks (or shoulder) to the pot along with any accumulated juices.  Add the ale, chicken stock, tomatoes, chipotles, black-eyed peas, and cinnamon stick and bring to a boil. Cover and cook over very low heat until the meat and beans are tender, about 2-1/2 hours.
Season the chili with salt and pepper.  Spoon off the fat from the surface and discard the cinnamon stick.  Serve the chili in bowls.  Pass the smoked cheddar, cilantro, scallions, and creme fraiche at the table. 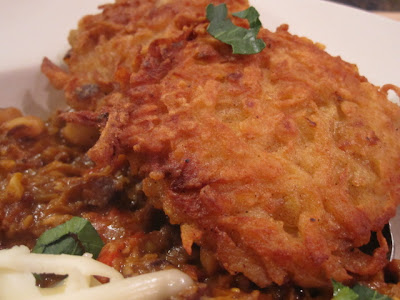 Dad's Potato Pancakes
Adapted from Michael Symon's Live to Cook
Serves 8
4 medium russet potatoes (about 2 pounds)
1 large egg, beaten
1/4 teaspoon baking powder
1 tablespoon all-purpose flour
1 teaspoon kosher salt
1/4 teaspoon freshly ground black pepper
1 medium yellow onion
8 tablespoons (1 stick) unsalted butter
Preheat the oven to 200F.
Peel the potatoes and keep them submerged in cold water.  In a mixing bowl, whisk together the egg, baking powder, flour, salt and pepper.  Using the large holes on a box grater, grate the onion and add it to the egg mixture.  Grate the potatoes onto a clean kitchen towel and wring as much water out of them as you can.  Add the potatoes to the egg mixture.  Toss so that the mixture is evenly combined.
Heat a medium saute pan over medium heat and melt half of the butter in it.  Using half of the potato mixture, shape 4 pancakes, each about 4 inches of diameter and about 1/2 inch thick.  Saute the pancakes in the butter until each side is golden brown and the interior is cooked through, 15-20 minutes.  Transfer them to a plate lined with paper towels and keep them warm in the oven while you shape and cook 4 more pancakes using the remaining butter and potato mixture. 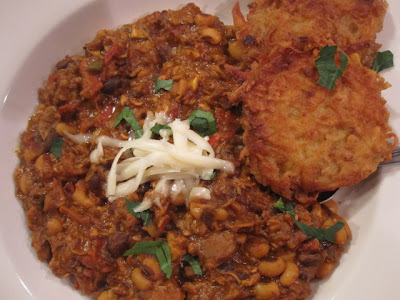 Notes/Results:  The chili is delicious, satisfying, and full of flavor.  I really love how the pork broke down as it cooked and became rather shredded in the chili.  My chili ended up rather thick, which we liked, but if you like your chili on the thinner side, you could always add more stock.  The potato pancakes made for a nice accompaniment to the chili. However, I made the mistake of making my potato pancakes on the thick side and therefore they weren't real crispy.  Next time, I will be sure to make them on the thin side so they stay nice and crispy.

I am submitting this to Ashlee at Veggie by Season for this round of Symon Sundays.
Posted by Kim at 11:30 AM