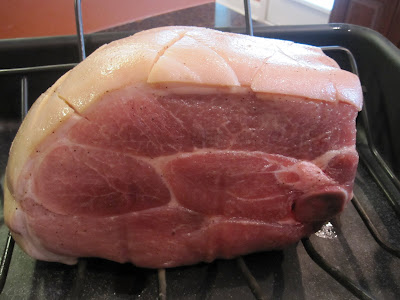 It has been an absolutely gorgeous Easter Sunday in the Bluegrass. The weather is a sunny 70 degrees and I'm writing this post from a lounge chair in my driveway. The country music is blaring, the kids and my husband are playing basketball and the sun is going down. The sound of the kids laughter is infectious. What more could you ask for? 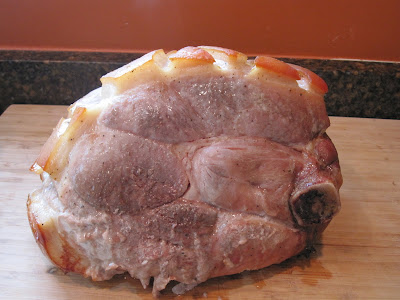 Well, a delicious dinner would've topped the day perfectly, but it didn't happen. Cooking my way through Tyler's Stirring the Pot is a lot of fun, but some of the recipes like this fresh ham are somewhat seasonal and need to be prepared for a special day, such as Christmas or Easter. This recipe for Baked Fresh Ham has somewhat haunted me. I had tried to prepare the ham for Christmas but was told that I wouldn't be able to get any fresh ham until Easter. I started looking for fresh ham at the beginning of March and never found it. Desperate, I called the butcher in Lexington. He explained to me that I couldn't just buy a 5-6 pound fresh ham but that I would have to buy an entire leg of pork. Twenty pounds of pork! He was kind enough to tell me that he would cut the ham and butcher the rest, free of charge. Thirty dollars later, I left his shop with a 6 pound fresh ham, 11 pounds of ground pork and two ham hocks. This is how Project Pork began. 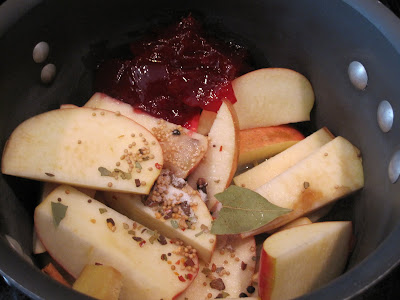 After much planning I was hopeful that Tyler's recipe for Baked Fresh Ham with Apple-Cranberry Chutney would be a winner. High hopes. Need I say more? High hopes get me almost every time.

Notes/Results: Tyler's recipe is about as simple as it gets. You simply oil, salt and pepper the fresh ham and baked it covered for 2 hours. After 2 hours, the ham is uncovered and baked for another hour. Simple enough, right? Well, the ham was flavorless, bland and chewy. My ham never achieved the pinkish hue that Tyler's ham has in the cookbook. Also, the outside of the ham was overcooked and dry while the inside of the ham was still undercooked. It was just plain gross. My father in law and my husband were the only ones who choked it down. I took one bite and pushed it to the corner of my plate. Luckily, we had enough side dishes that it all worked out okay. I have a ton of the ham leftover and I think it is rather inedible. When a recipe fails, I always try to think of what I could have done wrong, but I don't see where I could have gone wrong with this. I bought the ham from a very reputable butcher, it was extremely fresh, I followed all the directions, but it just wasn't very good at all. I have quite a bit of the ham left and I don't foresee us eating the leftovers. While I enjoyed the chutney, which tasted like a spicy applesauce, I did not enjoy it with this ham. I have chose not to post the recipe based on the fact that none of us cared for it very much. 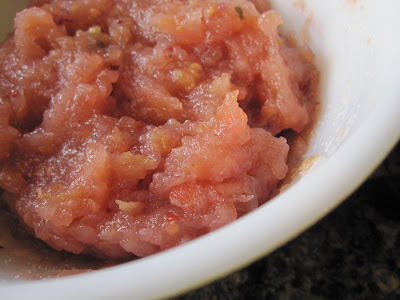 Even though we did not enjoy the fresh ham, I am excited about the 11 pounds of ground pork and the two ham hocks. Project Pork is still happily underway. I have been having fun thinking of ideas for all the ground pork and will have a Throwdown featuring breakfast sausage coming up this week.

I hope you all had a wonderful Easter Sunday. Even though the fresh ham didn't work out we had an absolutely wonderful day!
Posted by Kim at 4:29 PM