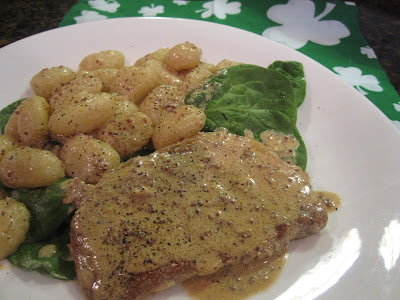 Happy St. Patrick's Day! Are you wearing your green today? If not, maybe you can eat green today! It's Easy Being Green Week over at I Heart Cooking Clubs and everyone is eating green. Some of us have cooked up some truly green dishes, others had to satisfy those deep dark mustard cravings and just threw some green on the plate for good measure;D

Yep, that would be me! I kinda cheated this week because I have been wanting to make Nigella's Mustard Pork Chops for a super duper long time. The problem: mustard pork chops are not green! Well, I don't know about you, but I can rationalize just about anything when I want to. I found some perfectly green spinach in my refrigerator and called it a day. One fairly green dinner on the table in less than a half hour, perfect for satisfying your mustard cravings. What? You don't crave mustard? Sorry to hear that! I can put mustard on anything (or so I thought).

Cut the fat or rind off the chops, and then bash them briefly but brutally with a rolling pin between 2 pieces of cling film/plastic wrap to make them thinner.

Heat the oil in a pan, and then cook the chops over a moderately-high heat for about 5 minutes a side. Remove them to a warmed plate.

Pour the cider into the pan, still over the heat, to deglaze the pan. Let it bubble away for a minute or so then add the mustard and stir in the cream.

Let the sauce continue cooking for a few minutes before pouring over each plated pork chop. If you're having gnocchi with, make sure you turn them in the pan to absorb any spare juices before adding them to your plates.

Notes/Results: This was the first recipe I bookmarked when I received my copy of Nigella Express. The funny thing is that I received the book at least a year ago and never got around to making these mustard chops. I kept hunting for hard cider and after a year or so of looking, I finally gave up. I decided to go ahead and substitute apple cider for the hard cider. I feel like a Negative Nelly lately, but I have to say that I really didn't care for this recipe. The pork and mustard sauce were okay, but not great. I took Nigella's advice and tossed the potato gnocchi in the mustard sauce and it was definitely not a great combination, if you know what I mean. I ate both the pork chops and spinach in mustard sauce, but thought the gnocchi and mustard sauce was pretty inedible. Maybe it was my fault for substituting apple cider for hard cider and substituting fat-free half and half for heavy cream.

Head on over to I Heart Cooking Clubs to see all things green this week!
Posted by Kim at 8:20 AM