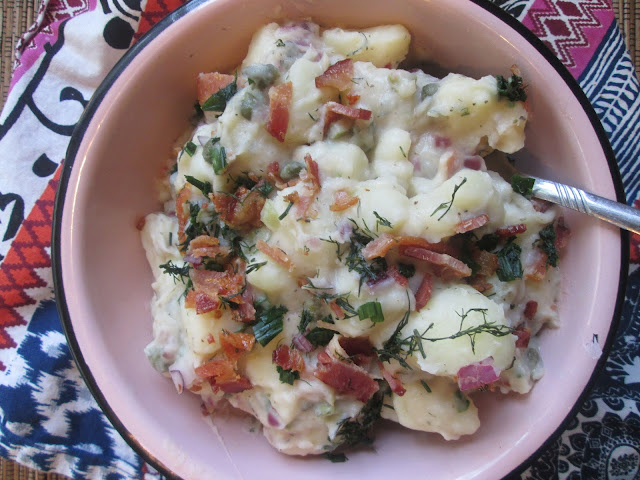 My co-worker had potato salad for lunch the other day and it looked so good. All at once I was craving potato salad something fierce. The problem is, classic potato salad isn't the healthiest.

I've tried the versions of potato salad using yogurt instead of mayo and they are just not the same. I just can't with them. Then I found this recipe, which uses a combination of broth and a little bit of mayo, and I just kinda knew it would be great.

What makes it healthy? Curtis does something a little different here that I've never seen before. He uses chicken broth and simmers it with the shallot, capers, and cornichons. This trick accomplishes three things. First, it softens the harsh flavor of the shallot, Second, it flavors the broth, which is then poured over the potatoes and flavors the potatoes. Third, it greatly reduces the amount of mayo you use, making the overall recipe much healthier than classic versions.

When you pour the broth over the potatoes and stir, the potatoes become flavorful and creamy all on their own. This means it is only necessary to use a very small amount of mayo. I have to say, I was really impressed with this method and couldn't believe how creamy and "classic" this potato salad looked and tasted.

You can serve this warm and it is really good that way, but I enjoyed it most when it was chilled and the flavors were allowed to marry together. I have to tell you, this is THE HEALTHY POTATO SALAD RECIPE and I am so glad I discovered it and had a chance to make it before summer officially goes away. I can have a reasonable portion size and still feel totally good about eating it! 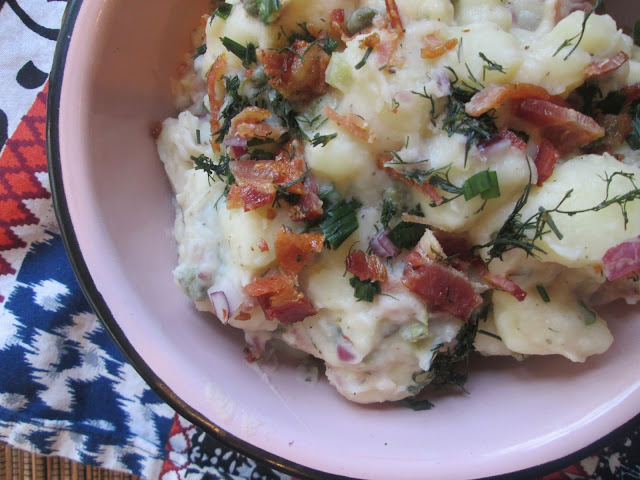 Place the potatoes in a large saucepan of salted water, bring the water to a boil over medium-high heat, and boil for about 10 minutes, or until the potatoes are just tender; a sharp knife should pierce a piece of potato easily and the potato should slip off the knife without falling apart.

Meanwhile, in a large heavy nonstick skillet, cook the bacon over medium-high heat for about 5 minutes, or until crisp and golden brown. Transfer the bacon to a plate lined with paper towels to drain.

In a small saucepan, bring the broth to a simmer over high heat. Add the shallots, cornichons, and capers, reduce the heat to medium-low, and simmer very gently for 2 to 3 minutes, or until the shallots soften slightly. Remove from the heat.

Drain the potatoes in a colander and gently shake them to release excess moisture. Transfer the potatoes to a large bowl.

Add one-third of the broth mixture to the hot potatoes and, using a silicone spatula, gently fold and turn the potatoes in the hot broth for about 2 minutes, or until most of it has been absorbed. Repeat 2 more times, adding all of the solids and just enough of the broth to moisten. The potatoes should break down a bit. Set aside.

Gently fold the bacon and parsley into the warm potatoes, then gently fold in the aoili or mayo. Season to taste with salt and pepper. Serve warm, at room temperature, or chilled. 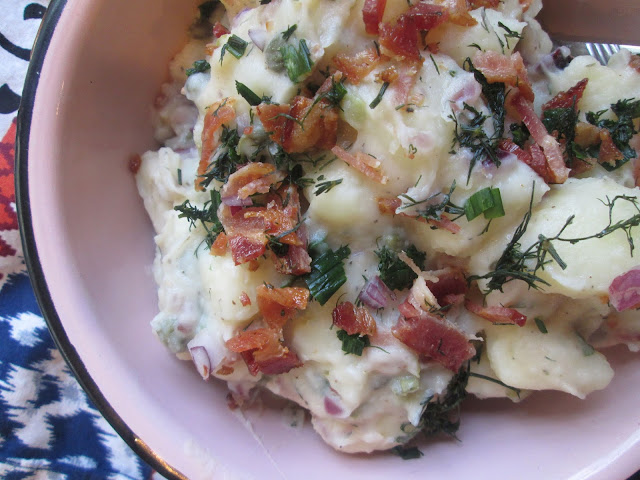 Holding On To Summer @ IHCC