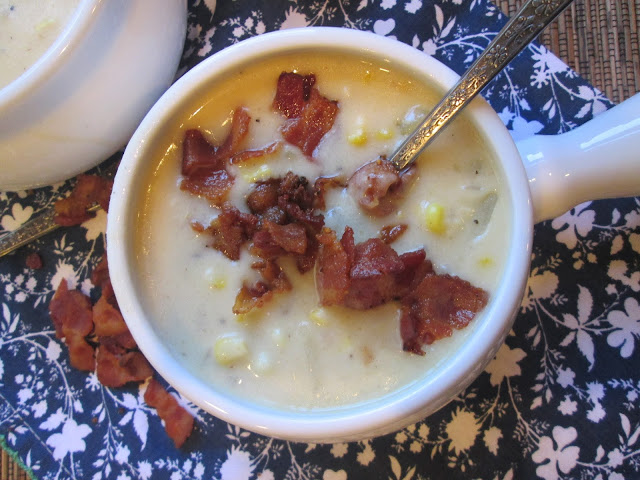 Summer left us all at once. One day it was 90 degrees and the next day there was a chill in the air. Fall has definitely arrived! One of my first thoughts went to soup, potato soup.

I came across Ina Garten's Cheesy Corn Chowder, which is full of potatoes, fresh corn cut from the cob, onion, bacon, and half and half. All things I had on hand that needed using up. Don't you love it when a plan comes together like that?

Now, by no means is this a healthy soup. Ina has you using bacon fat, oil, and butter. I went ahead and nixed the oil and butter because honestly the bacon fat was all I needed. Some people might think bacon fat is unhealthy. I tend to disagree. It's not something you want to eat every day, but it is natural and in moderation I believe it is perfectly fine. So bacon fat is the only fat I used here.

This soup is everything I wanted it to be. It was good on day one and absolutely delicious on day two. Overnight the potatoes thickened the chowder and everything became more flavorful. I love the comforting nature of potato soup and the corn adds a touch of freshness. The bacon...who can argue with the crunchy saltiness of bacon on top? This is a hug in a bowl and exactly what I needed. 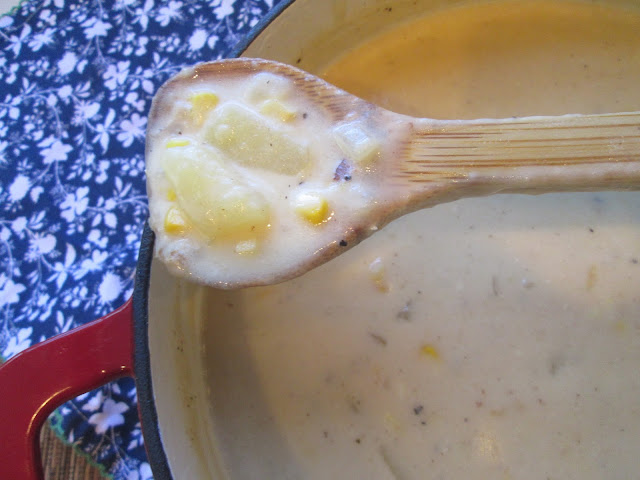 2 cups half and half

In a large stockpot over medium-high heat, cook the bacon and olive oil until the bacon is crisp, about 5 minutes. Remove the bacon with a slotted spoon and reserve. Reduce the heat to medium, add the onions and butter to the fat (you may not need all this butter and fat), and cook for 10 minutes, until the onions are translucent.

Stir in the flour, salt, pepper, and turmeric and cook for 3 minutes. Add the chicken stock and potatoes, bring to a boil, and simmer uncovered for 15 minutes, until the potatoes are tender. If using fresh corn, cut the kernels off the cob and blanch them for 3 minutes in boiling salted water and drain (I skipped this step and just added the corn to the soup for 3 minutes). Add the half and half and cheddar. Cook for 5 more minutes, until the cheese is melted. Season, to taste, with salt and pepper. Serve hot with a garnish of bacon and sliced green onions, if desired. 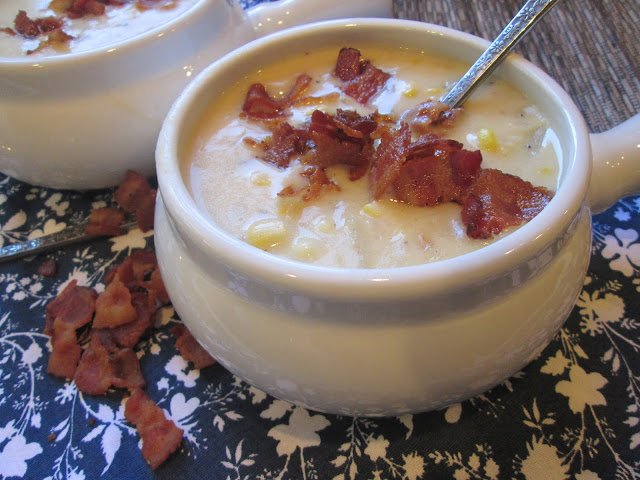 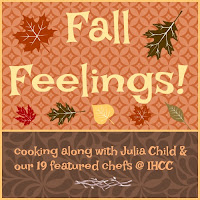