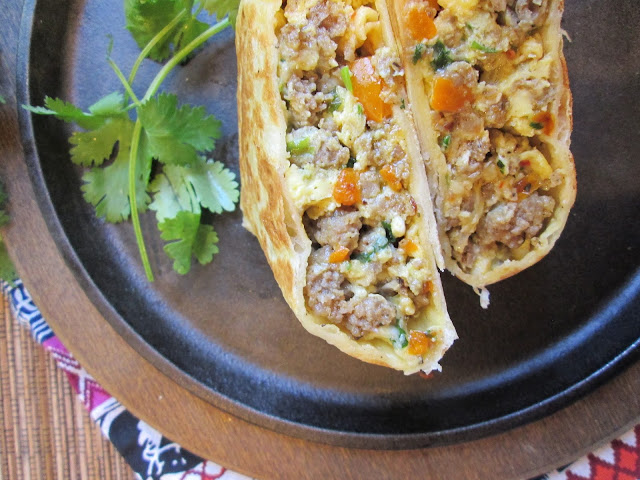 Who doesn't love a breakfast burrito or chimichanga for breakfast? We certainly never get our fill of them in my house. I find myself making them using up bits of meat, cheese, and veggies and changing them up each week, depending on what we have in the fridge.

The burrito or chimi is the perfect recipe for times such as these when you need to use what you have on hand because you DARE NOT go into the grocery since NO ONE can wear a mask. Seriously people, how hard is it? I don't want to hear the madness about being sheep. Just wear the mask.

Rant over. I love a breakfast burrito, but have you had a breakfast chimichanga? This is my new favorite thing. Not just for breakfast, but for lunch and even dinner. Take whatever filling you have on hand: beans, rice, and cheese; meat, veggies, and rice; eggs, veggies, and cheese; and stuff it into a big flour tortilla. Fold it up or roll it up. Place it in a good nonstick saute pan. You really don't need any oil or butter, maybe just a splash or a touch if you feel like it. Using tongs, turn the burrito every which way until the tortilla becomes golden brown and crispy all over. There you have it....a chimi with a crispy exterior and a toasted flavor that is sure to be a tastier version of any burrito around, and with very little to no added calories!

A chimi like this has been our new go to staple during the pandemic. Leftover taco meat and rice? Throw in some cheese and make a chimi. Leftover scrambled eggs and veggies? Turn it into a chimi. Only have beans and rice on hand? Add a touch of cheese and/or some veggies and turn it into a chimi. See the pattern here? It's easy and oh so delicious. There is only one rule: make the filling fresh or gently reheat whatever you stuff in your chimi (you don't want a cold filling). Either way, I haven't met a chimi I didn't like and it has been a very practical solution for the times we're in.

Now, I would be remiss if I didn't mention how delicious Curtis' filling is for these breakfast burritos/chimis. IT IS SO GOOD! I did change up the method a bit, but I kept the ingredients the same so I know the flavor combination is the same. Spicy from the hot sausage and jalapeno, flavorful from the sausage, green onions and peppers, and fresh from the cilantro. This is a winning combination for a breakfast burrito! Try it and see.

And whatever you do, start making chimis! 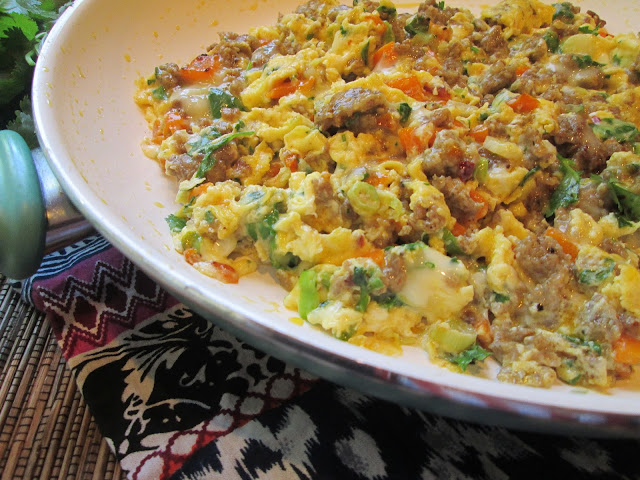 Note: I am going to deviate from Curtis' recipe quite a bit, but I feel as though the end result is the same. See deviations in parenthesis below. Curtis' directions are in regular font. Mine are in bold and in parentheses. I used half a pound of hot breakfast sausage, a touch of cream (certainly not 2/3 cup), an orange bell pepper in place of a jalapeno, and I added in about 1/4 -1/2 cup grated pepper jack cheese). I also used 4 eggs instead of 6 eggs for two reasons, to conserve eggs and also to have a meatier burrito since we haven't been eating as much meat lately.

Preheat the broiler. Place the sausages on a heavy rimmed baking sheet and broil for 3 minutes on each side until they are cooked through and golden brown. Set the sausages aside until they are cool enough to handle, then cut them diagonally into thin slices. (I much prefer to have the sausage crumbled into my mixture so I used one half pound spicy breakfast sausage and cooked it in the skillet until it was golden brown, adding the jalapeno, cilantro, and green onions towards the end to incorporate).

Using a fork, mix the eggs(using only 4 so the mixture was quite meaty), cream, salt and pepper in a large bowl to blend. Melt the butter in a large heavy nonstick saute pan over medium low heat. Add the egg mixture. Once the eggs are just set on the bottom of the pan, add the sausages, scallions, cilantro, and jalapeno. Stir the egg mixture very slowly with a silicone spatula, scraping from the bottom of the pan, for 3 to 5 minutes or until the eggs are no longer runny. (Since I cooked my sausage in the saute pan I went ahead and kept the sausage and oil from the sausage in my pan for more flavor. I whipped the eggs in a bowl with a touch of cream (certainly not 2/3 cup) and added the eggs to the pan with the sausage mixture, allowing it to set before sprinkling on some cheese and slowly incorporating the cheese until the eggs were done. I then removed the sausage and egg mixture to a bowl).

Meanwhile, heat a griddle pan over medium high heat. Cook each tortilla on the griddle for 1 minute on each side or until warmed and softened. Divide the egg mixture among the hot tortillas, and wrap the tortillas around the egg mixture to enclose it completely and form a burrito. Serve with your favorite hot sauce. (I used the same pan I cooked the sausage and egg mixture in, removing the mixture to a bowl. I laid my tortilla out, filled it with a substantial amount of filling, folded it up, and sauteed the burrito in my nonstick pan, until it was golden on all sides, using tongs to turn the burrito around. Then I placed the burrito (or maybe chimichanga) onto a plate and sliced it down the middle. Burrito, chimichanga? You decide!). 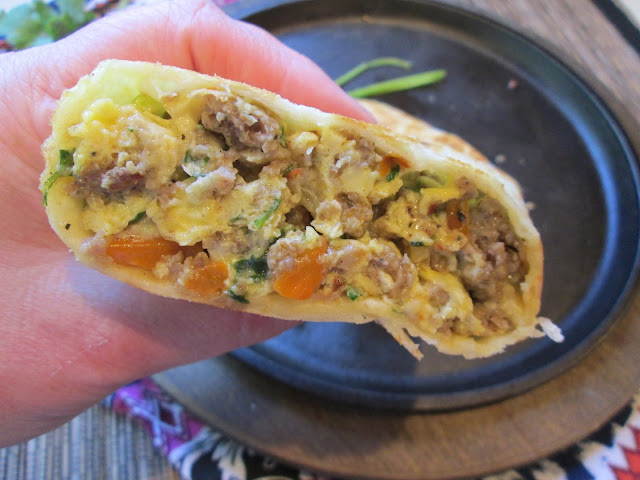