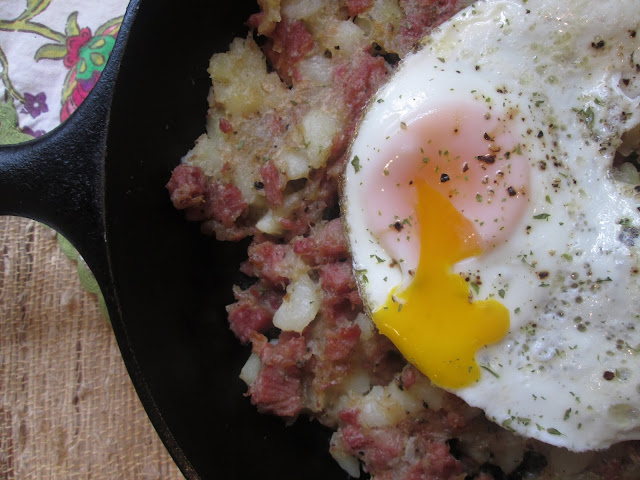 I like recipes with minimal ingredients. Evidently I also like recipes with potatoes. As proof, my last FIVE posts have all been about recipes centered around potatoes! Ruth's Sauteed Cabbage with Bacon and Cream and Potato Pierogi; Tessa's Omeleta Horiatiki with Potato, Feta, and Oregano; A roundup of Ruth Reichl favorites with two of them being Cheddar and Garlic Twice-Baked Potatoes and Shirred Eggs Over Potato Puree; Tessa's Patates Tiganites (Greek French Fries), Nigel's Classic Shepherd's Pie, and now Mark Bittman's Corned Beef Hash! I think it's reasonable to say that I need to move on from potatoes and share something fresh and light next.

I'm laughing because there are two reasons I have so many potato dishes. First and foremost, we just love potatoes. Who doesn't? Secondly, potatoes are ALWAYS in my pantry and I can ALWAYS make a potato dish without having to venture out and run to the store.


I tell ya. Put some potatoes in your pantry and with a few other basic ingredients you can always put a meal together!

I bought this corned beef hash on sale for a mere $1.99/lb, which is a fabulous price. Listen to me: DO NOT BOIL YOUR CORNED BEEF! Roast it! Roast it at about 300F to 350F, covered, for about an hour per pound. If your corned beef is good quality then you should end up with a very tender corned beef that almost falls apart, or shreds, like a roast. NOTE: Save any liquid that accumulates in the pan for your hash! Note that it will be quite salty so if you like salt then this will be okay, but if you do not, then you will want to use another liquid such as stock.

Corned beef hash is a delightful and hearty dish that is exceptionally delicious when made from scratch! Bittman's version is different in that he calls for more liquid, so it does not fry up to be as crisp as other versions. When mine came together it had great flavor, but was quite soft, and while some people would like that, I opted to place my has under the broiler (as he suggested) to create a crisp crust on the top. The broiler worked nicely and was much easier than standing over a pan, flipping and flopping the hash, which can be quite finicky. I topped the hash with two over-easy eggs and watched as the yolks oozed over the hash. We are big fans of a skillet breakfast and corned beef hash is easily one of our all-time favorites, perfect for an Easter Brunch! 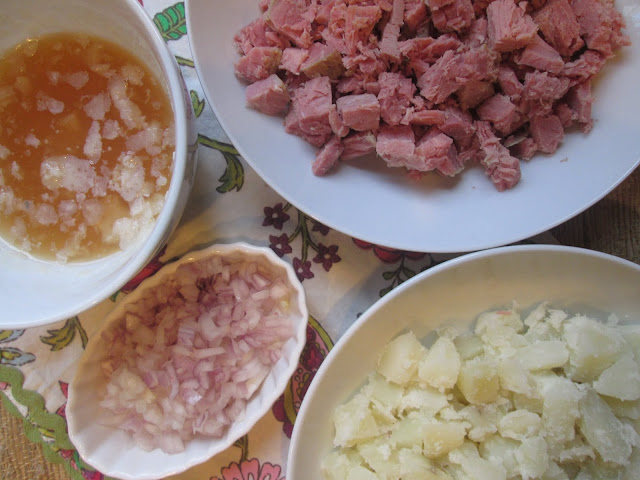 Toss together 2 cups of left-over corned beef (I don't like to boil my corned beef. I like to roast it at 350 for about an hour per pound). Add 2 cups cut-up cold boiled potatoes.  Add 1 cup chopped onion and 1/2 cup liquid (*I used the leftover stock from roasting the corned beef, but be warned if you do this - it will be quite salty-also watch the amount of salt you add to this dish*). You can also use stock, tomato sauce, milk, cream, or gravy as a liquid. The goal is to moisten the mixture but not so much as to make it soupy.

Heat 3 tablespoons oil or butter in a heavy skillet, preferably non-stick, over medium-low heat. When the butter has melted or the oil begins to shimmer, put the hash in the pan and cook it, undisturbed, for about 10 minutes, or until a nice crust has formed. Turn the has and brown the other side, or flip half of it over onto the other, or brown the top under a broiler (mine was too moist to brown on the stovetop so I put it under the broiler).  Serve with over easy eggs* on top and a sprinkling of parsley or something green. 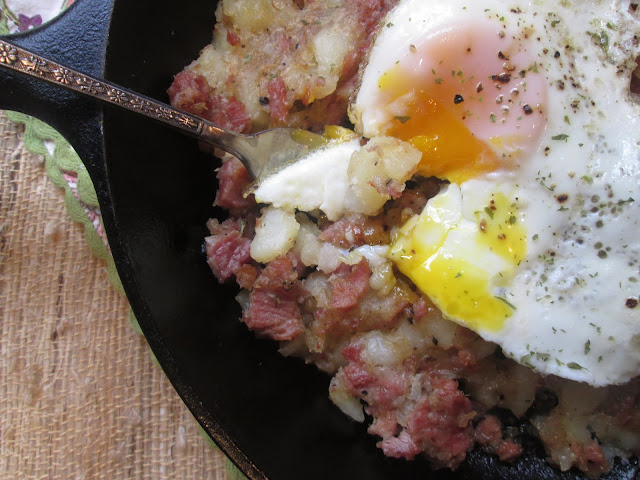