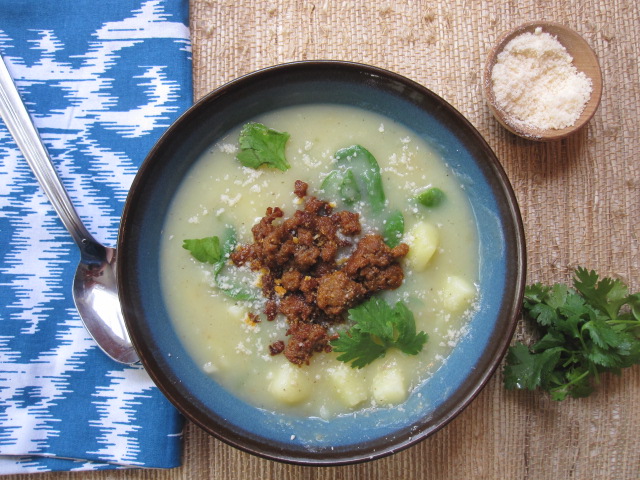 Sometimes you just need comfort food.  Food that gives you a hug. The past few weeks have have been extreme.  We had a great family vacation over the 4th of July, but we came back to two broken vehicles and some heartbreaking news from a dear friend.  Lots of ups and downs.  On top of that things have been really busy and we really haven't had time to process anything.

This afternoon we had a long awaited thunderstorm and it cooled off just enough to make a comforting bowl of soup.  It's been a few weeks since I had a few hours of time to myself and I decided kitchen therapy was definitely in order.  Potato soup is one of the most comforting meals I know of so potato soup it was.

This potato soup differs from the traditional cream and cheese laden potato soup.  This is a chicken broth based potato soup.  It has no cream or butter and only uses a small amount of cheese as a garnish.  Surprisingly, this potato soup is every bit as creamy and delicious as it's calorie-laden counterpart.  We loved the heat from the jalapeno, the healthy addition of greens, and the gorgeous and flavorful chorizo topping.  My husband, who isn't a big soup fan, enjoyed two bowls.  It was a hit for sure! 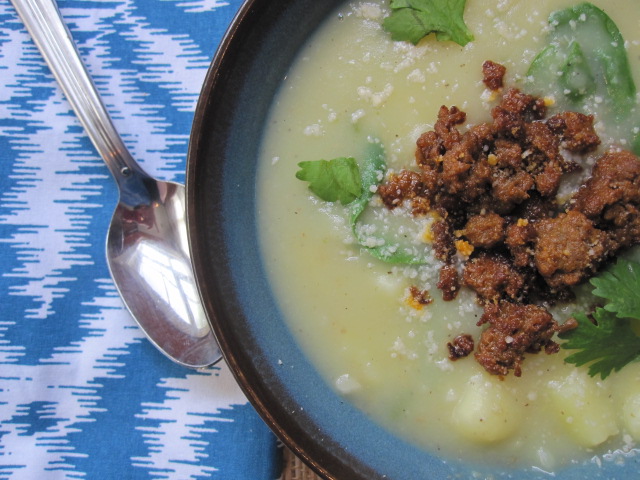 Cut (4) of the potatoes into 4 pieces each and scoop them into a large soup pot (dutch oven), along with the garlic.  Chop the remaining (2) potatoes into 1/4-inch cubes and set aside. Pour half of the broth into the saucepan and set it over high heat.  When the liquid boils, reduce the heat to medium and simmer briskly until the potatoes are tender, about 15 minutes.

While the potatoes are cooking, roast the jalapenos over an open flame or 4 inches below a broiler, turning regularly until blistered and blackened all over, about 5 minutes for an open flame, 10 minutes for a broiler.  Cover with a kitchen towel or place in a brown paper bag. Let cool until handleable.  Cut the top off the chiles, slit the side from seed pod to point, open out flat and scrape out the seeds; discard.  Flip over and scrape the skin off the flesh; discard.  Chop the flesh into smallish pieces.

When the potatoes are tender, use an immersion blender to coarsely puree the soup base (or coarsely process in several batches in a food processor or a loosely covered blender draped with a kitchen towel, then return to the pan).  Add the remaining half of the broth, the reserved cubed potatoes and the chile pieces.  Simmer 10 minutes.

Meanwhile, fry the chorizo in a large skillet over medium heat, breaking up any lumps, until thoroughly cooked and well browned, about 12 minutes.  Scoop onto a plate lined with paper towels to drain.

Just before serving, stir the greens into the soup and let simmer until they are tender—2 to 4 minutes.

Taste and season the soup with salt, usually about 1 1/2 teaspoons depending on the saltiness of your broth.  Ladle into warm soup bowls, then sprinkle with a portion of the chorizo, cheese and cilantro.  Serve right away. 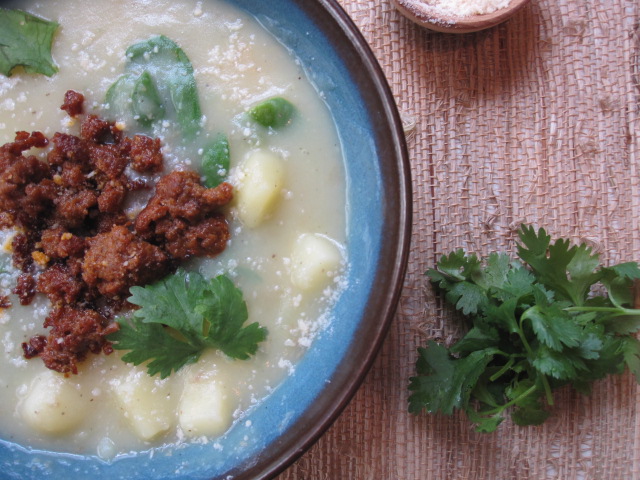