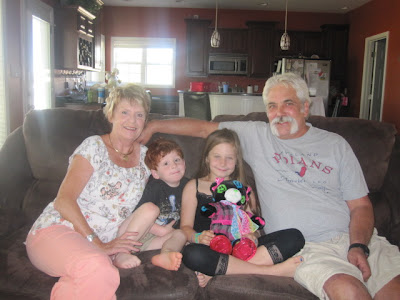 Whew! Things have been wild and crazy here lately! I was so happy to have my Dad and his wife visit over the Labor Day weekend. Spending time with my Dad is always at the top of my list. He and I have always been big pals who understand each other perfectly. A look....a glance and we know what the other is thinking. Growing up he was the best father a girl could have and the biggest part of my heart will always belong to him. We all had a fabulous weekend filled with good eats, shopping, and lots of laughter. The weather was beautiful and the nights were cool enough for bonfires that lasted up to the midnight hour. As always, the weekend went by much too fast and I was really upset when I said goodbye to my Dad. That empty feeling crept up on me when I watched the car pull away. 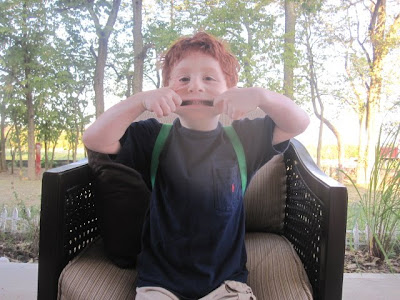 In other news, last week my clock stopped ticking.....you know the one. The one that stops ticking when a woman turns 35? I'm thrilled with my two children and am thankful for them everyday, but it's weird to think that I better hurry up if I want more. I'm not sure if I'm ready to say goodbye to having more babies. To compound matters, my baby, my youngest, aka the sweetest boy on the planet, had his first day of preschool yesterday. I don't cry easily, but I cried about that. A lot. 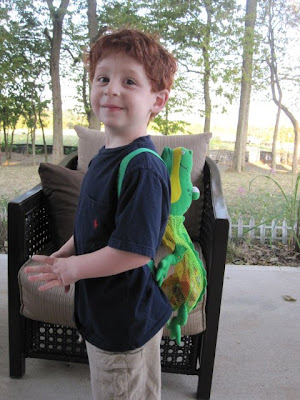 I didn't get the chance to be a stay at home mom with my daughter. However, I have spent nearly every waking moment with my son from the time he was born. I think most parents, or mothers, feel anxiety when sending their children to school, but with Jackson it is much worse than that. He has severe food allergies. I'm talking major. Real life and death stuff. We've never left him with anyone other than his grandparents based solely on the fact that he has so many food allergies. Because he is allergic to so many things there is no question that he will be exposed to something, at one point or another. Although he is aware of his allergies, he is only 3 years old. Scared out of my mind, I packed his list of allergies, his symptoms, and his epipen and took him to school. Before I left he said "I totally love you mom." It was almost impossible to say goodbye. Let's just say it was a good thing I had cried it all out in the days before. I was able to keep it together as I left. I didn't know what to do with my time alone so I shampooed the carpet. I was way early picking him up from school and as I peeked through the classroom window I felt a huge sense of relief when I saw that he was okay. And then I realized that I would have to do it all over again. That's when I realized that I'm no good at saying goodbye.

Last week Tina from Life in the Slow Lane at Squirrel Head Manor was sweet enough to give me the Life Is Good Award. I adore Tina and her blog and definitely agree with her that Life is Good.......otherwise it wouldn't be so hard to say goodbye! I was supposed to answer ten questions about myself and pass it on, but I'm feeling rebellious so I decided to break the rules and share this post instead. I know Tina won't mind at all:)
Posted by Kim at 1:00 PM