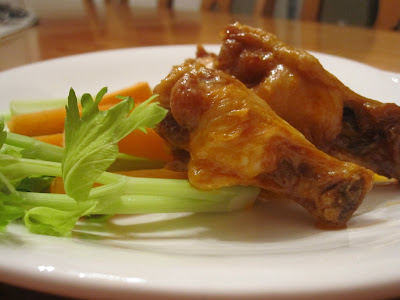 It's time for another Throwdown here at Stirring the Pot. About a week ago, I put up a poll where readers could vote on the next Throwdown and........... chicken wings won out! Never having made chicken wings before, I had a fun time choosing the two competing recipes. I wanted to compare cooking techniques for the wings, so I kept the wing flavor the same. I didn't want to be confused by which flavor I liked best, I wanted to pick the wing that was simply "cooked the best".

THE CONTENDERS
I chose Alton Brown's Buffalo Wings, which are steamed in order to melt away some of the fat in the chicken skin, baked until crisp, and then rolled around in a garlicky buffalo sauce. I compared Alton's recipe with Paula Deen's Uncle Bubba's Wings, which are marinated for 24 hours, deep fried, and served with two dipping sauces (buffalo and sweet asian chili).

Results/Notes on Alton Brown's Wings: Somewhat of a hassle. I don't have a steamer, so I had to use my metal strainer over a pot of boiling/simmering water. After steaming the wings, they are placed in the refrigerator for an hour to "dry out". After the wings have had a chance to dry out, they are baked, being rotated halfway through and coated in sauce. I felt like this was a lot of work for 12 chicken wings. (Pictured below are Alton's wings)

Results/Notes on Uncle Bubba's Wings: Marinate 24 hours in a combination of hot sauce, cajun seasoning, cayenne pepper, and garlic powder. When ready to eat, simply fry them for 10 minutes and you are all set. Simple and easy, the way I like things. (Pictured below are Uncle Bubba's wings) 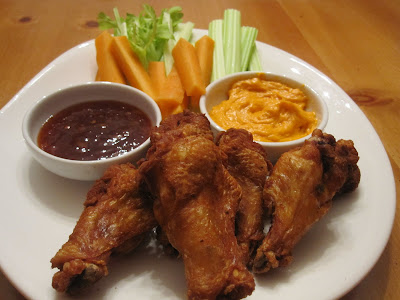 Sounds like I'm already biased, doesn't it? Which wing do you think you would prefer? I thought I had it all figured out before I even tasted one.........

But I was pleasantly surprised! Alton Brown's steamed and baked wings were actually our favorite. It was a unanimous decision between me and my husband.

Well, Uncle Bubba's wings were easy and quickly deep fried, but they were a little too crunchy. Maybe this was because they were "dry" and not tossed with any sauce. I thought that I would like dunking the wings in sauce, but it turns out that it isn't very easy to do. Both my husband and I agreed that we like our wings to be messy and coated in sauce. Nonetheless, this was still a good wing recipe and had great flavor and color from the marinade.

Alton Brown's wings were a little more labor intensive, but they were dripping with sauce and messy like you would expect a good wing to be. The skin had a nice crispness about it, but wasn't too crunchy. Alton's wings were more reminiscent of the wings we are used to eating.

All in all, this was a fun challenge! Doing research on wings was fun. There are so many ways to prepare and serve them. I'd love to try wings with Sriracha sauce and I've even seen some tossed with peanut butter and jelly. This challenge has just opened up the door to many more possibilities.
Posted by Kim at 2:58 PM